Garden Centres only appeared after the war. They developed from the concept of the retail plant nursery but with a wider range of outdoor products and on-site facilities. Before the 1950s it was thought that plants could only be raised in the ground by plant nurseries. You brought your bare-root roses or shrubs from them in the dormant season between October and March to plant in your garden. Many grew ‘catch crops’ such as tomatoes to survive the summer months. Also, existing pots were heavy as they were made of baked clay, it wasn’t until the 1950s that mass production of Polyethylene began and the plastic plant pot appeared. Polyethene itself was only discovered in 1933.

The change was started by Dorset nurseryman, Edward Stewart, who is credited with introducing the practice of growing plants in containers, which left their roots undisturbed and enabled them to be sold all year round. He needed to do something with his plant nursery business as sales had been poor since the war. Stewart visited the States and Canada where he saw the practice of containerisation for the first time. He came back to England to put this new concept into practice which changed the whole horticultural industry. He opened his first ‘garden centre’ in Ferndown, Dorset in 1955 but when he opened his second shop in Christchurch in 1961 he added a coffee shop and the modern ‘garden centre’ was born. Stewarts Garden Centres is still operational today.

Even though containerisation transformed the horticulture industry, customers still buy plants mostly in the four months from March to June, and again in September. One of the reasons why in recent years, garden centres have evolved to become a leisure destination with play centres for children, restaurants and other activities designed to improve the shopping experience and increase the time spent at the centre. They also needed to compete with rising of DIY stores in the ’80s and ’90s, the main competitors to the traditional garden centres.

Moorfield Garden Centre was located where Westminster Gardens now is. The Garden Centre was originally started by William Moore who ran the Centre with his sons Norman and Milton in 1960. He got the idea from travelling around the region selling car insurance and purchased the land shortly after the second world war.

An interesting quirk is the Garden Centre’s name, Moorfield. Generally, it is assumed the centre was named after the family name but this may not be the truth. Richard Moore goes on to explain: “Although the land was purchased originally after the war. My father used to cycle from Moorfield Road (my grandfathers ‘William’ home located in west town,

Peterborough) every day to Eye. I think that’s where the name came from, but I am not 100 per cent sure, but I was always puzzled why the ‘e’ was left off the name ‘Moore’.”

Before the Garden Centre was built the main crop grown was Chrysanthemums. These were transported to Eye Railway station before it closed, and sent to all different parts of the country. However, after one year when they had a cold spring, frost affected the harvest a decision was made to move away from this type of horticulture and into retail. With the increased use of the car and Peterborough being designated a new town in the 1960s, it was an excellent foresight to open the shop.

Due to the success of the business, the garden centre was featured in a commercial publication in 1964:

“Messrs. W. Moore and Sons Ltd, of Eye, near Peterborough, undoubtedly took quite a risk when they decided to go ahead with the garden centre project. Apart from cost and management, the idea had several points in its favour: the main road running right past, a speed limit to slow the traffic down and a handy strip of land right adjacent to the road. 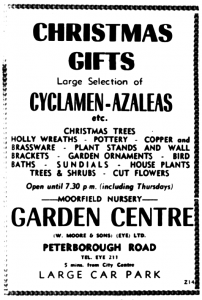 While a main road is considered essential (plus adequate off-road parking space), today most of the customers are regulars, either from the immediate area or from as far as 50 miles away motorists who pass the centre many times during their work, yet who make a special trip out when they want to buy something. The centre makes a point of selling everything for the garden, including furniture, fish ponds, bags of fertiliser and of course home-produced bedding plants, trees and shrubs. Pot and house plants, mostly homegrown, are a very popular line, and also fresh-cut chrysanthemums and, when available, tomato plants. Yet fresh-picked tomatoes, direct from the glasshouses, are only an indifferent seller, the public now linking the garden centre with flowers, but not fruit or vegetables!

Greater Confidence: The success of the centre has enabled forward expansion of the commercial growing side to be done with greater confidence, and a trend towards specialisation in the production of pot and house plants to continue, with an eventual output target of some 75,000 plants per year, with something seasonable to sell every month.

Already well over half of the 11,000 square feet of heated glass is devoted to these two lines-with special emphases on house plants and 1,500 Moneymaker tomatoes in the remainder of the glass. The tomatoes are grown as a catch crop, and will, it is hoped, eventually be replaced entirely by pot and house plants.

However, the propagation of tomato plants for retail sale will continue, sales of these from the garden centre totalling some 5,000 a year.

As Mr Milton Moore, who looks after the growing side put it: “You can fill a house with 10 shillings worth of seed, so the temptation to sell the plants cheaply is great and generally the market competition for the same varieties is very keen. Yet with the expensive cuttings-only varieties, the same house may cost £50 or more to fill, and you just can’t afford to give them away! You then have to wait for the right prices, both to cover your outlay, growing costs and a profit.”

Outside crops include 50,000 early chrysanthemums of the main disbudding varieties. Earlier in the year a substantial chrysanthemum cutting trade is done, chiefly of early varieties.

Reasons for the success of this venture are many, but perhaps the main one is that it is essentially a family concern headed by Mr William Moore, who chiefly looks after the shop assisted by his wife, with the glasshouses and flowers under the control of his son, Mr Milton Moore, while the other son, Mr Norman Moore, has charge of a separate rose nursery not far away.

The centre is open six days a week and sometimes for part of Sundays, staffed chiefly by the family who give a personal and friendly service.

There can be few horticultural enterprises that run so smoothly, both as a family team and as an economic unit, with an excellent balance between the local retail trade and the much larger wholesale outlets. Both the growing department and the garden centre seem complementary to each other, and there can be little doubt that the Moore family enterprise plays quite a big part in linking town and country a little closer together.”

The original building was around 50 sq feet but by the end of the 1960s the main building had doubled in size. A glasshouse was also added to the east side. But even this wasn’t enough space to contain the business. In 1975 planning permission to build a new glasshouse on the rear of the building was applied for which again doubled the main premises to over 400 sq feet.

An aquatic centre opened in 1981 and a landscaping business took over some of the land at the bottom of the premises. As the site’s editor, I still remember buying sweets from the garden centre and walking through the aquatic centre as a youngster fascinated by the bubbling fish tanks.

Milton left the business around 1983 and from then on the garden centre carried on under Norman’s ex-wife. A planning application for 96 houses was granted to Persimmon for the site in 1994 and the houses were built soon after. And that may have been the end of a garden centre in the parish of Eye except Van Hague opened on the £20 million Peterborough Garden Park development in spring 2010.

Thank you to Richard Moore for the photos and information.