The origins of what we may now recognise as the public house began to appear during the Roman colonisation of Britain as places where travellers could obtain rest and refreshment on the new road network.

In 1892 its recorded that there were nine public houses, two which were beer houses (explained below) in Eye:

Under a banner of “reducing public drunkenness” the Beer Act of 1830 introduced a new lower tier of premises permitted to sell alcohol, the Beer Houses. At the time beer was viewed as harmless, nutritious and even healthy. Under the 1830 Act, any householder who paid rates could apply, with a one-off payment of two guineas (roughly equal in value to £159 today), to sell beer or cider in his home and even to brew his own on the premises. Beer houses were not permitted to open on Sundays. The beer was usually served in jugs or dispensed directly from tapped wooden barrels on a table in the corner of the room. Often profits were so high the owners were able to buy the house next door to live in, turning every room in their former home into bars and lounges for customers.

Broughton’s Beer House in Eye was one such building. The only reason any record of this survives is because the owner was charged by the police for keeping his house open at unlawful hours. An edition of the Peterborough Advertiser in November 1860 reported that “Jackson, p.s., stated that on Sunday 4th November he went in plain clothes to Broughton’s house, and saw the landlord with a half-pint of beer in his hand. There was a man from Thorney sitting with half-pint mug before him. Four other men were present, and there where mugs on the table” it then continues; “Defendant admitted that he had only had the house a fortnight, and being a shoemaker, was obliged to see his customers when they came. Ordered to pay 14s expenses, without a conviction”.

The Wine and Beerhouse Act 1869 reintroduced the stricter controls of the previous century. The sale of beers, wines or spirits required a licence for the premises from the local magistrates and restrictions on the hours Public Houses could sell alcohol were created. This was further compounded by the Defence of the Realm Act 1914 which set the 11pm limit on the sale of alcohol throughout the rest of the twentieth century. The Licensing Act 2003 repealed the previous licensing laws for England and Wales, taking responsibility away from magistrates and placing it in the hands of local licensing boards. The 2003 act also led to the rise of the micropub.One example is the popular Frothblowers micropub in Werrington which won Cambridgeshire CAMRA Pub of the Year in 2019.

In 1982 there were 67,800 public houses in the United Kingdom. By 2019 this had dropped to 47,200 and they are still in decline. There’s no doubt, people’s changing lifestyle has put enormous pressure on the traditional local pub. Nowadays you can have a drink at a restaurant, bar, hotel or club as well as the local pub. On top of this has been the rise of the internet, the ever-widening array of alternative leisure pursuits and the increase in cheap supermarket alcohol so more people are drinking at home. In 1987 the average price of a pint of lager in the pub was about a £1, today its nearly £4. In 2007 the smoking ban in public places came into effect. Some say that the smoking ban was the ‘final nail in the coffin’ for the local pub. In 2007 the village still had four working pubs, The Greyhound, The Blue Boar, The Spade and Shovel and The Red Lion, today only the Blue Boar remains open.

Can politicians save Britain’s pubs?
Campaign for Real Ale (CAMRA)
Is This The End Of The Great British Pub?

Location of the village pubs 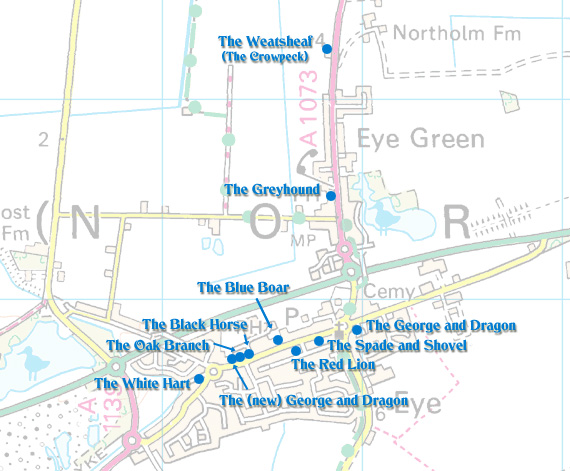 Below is an 1887 map showing the centre of Eye and three of the pubs. At that time the Spade and Shovel looks like it’s sitting on the edge of what would have made a great village green.

This is the oldest surviving pub in Eye, the building is estimated to date back to the 17th Century. It was an established stop on the coaching route from Peterborough to Wisbech and King’s Lynn. 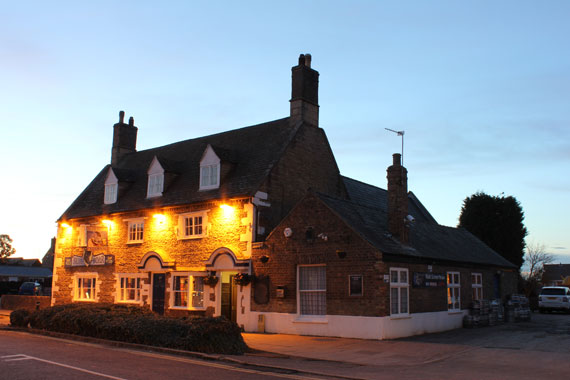 The blue boar is a heraldic reference to the Earl of Oxford. The white boar similarly refers to Richard III (1452 – 1485). It is said that after the defeat of Richard and the Yorkists at the Battle of Bosworth (1485), many White Boar signs were hastily painted blue since the Earl of Oxford was a leading supporter of the Lancastrian cause. 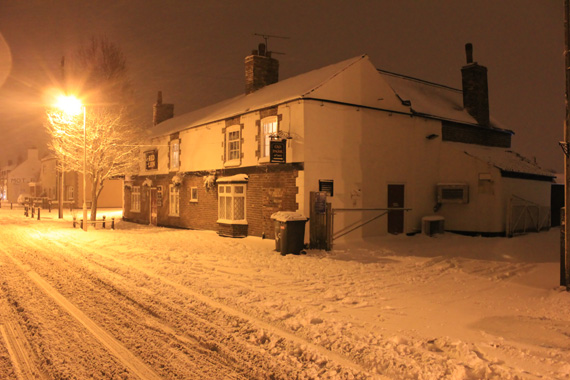 The Red Lion is one of the most common pub names in England. The name of the local pub probably comes from the Duke of Bedford, whose family arms shows a red lion. Having entered royal service in about 1506 Sir John Russell served in the army of Henry VIII in France and was knighted for valor in 1522. After the dissolution of the monasteries, he was given ownership of the land around Eye as part of his reward for services to the crown.

In October 1891 The Peterborough Standard reported “Mr Steels, of the Red Lion, provided his customary harvest supper on Monday. Over 50 sat down, and a pleasant evening was afterwards spent.” Bygone times…

The Spade and Shovel (Closed) 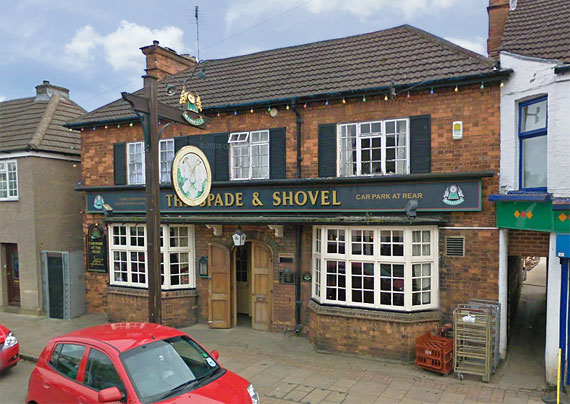 The Spade and Shovel is a late 19th-century building on the high street. The original pub was thatched but a large fire destroyed this earlier building. The Peterborough Standard of October 1891 reported a large fire and total destruction of a public house in the village. This was the Spade and Shovel owned by Messrs, Goodwin, brewers of Newark-on-Trent. At the time the landlord was Mr George Reynolds who had been a tenant for just two years. The Peterborough Standard reported that “The building was a very old one, and, like the majority of others in the street was thatched”. Mr Reynolds had smelt the burning on a Sunday and after a careful search had decided that something was amiss with the Chimney. Smoke was smelt again during the evening but its position could again not be discovered.

At 3 am Monday morning Mr Forth who lived opposite the pub noticed that the roof was on fire and raised the alarm. Around 6 am a boy was despatched by ‘Pony’ to Peterborough to summon the Fire Brigade, by the time they arrived the roof had already fallen in taking some of the inner walls with it and all they could do is prevent the fire spreading to adjoining properties. Water was drawn from nearby wells and although the Spade and Shovel was beyond help, the thatched cottage next door was saved due to the efforts of those trying to prevent the spread.

The fire was found to be caused by a wooden beam that ran into the open chimney. Just about everything was destroyed, the heat was reported to of been so great the iron bedsteads were “twisted and bent about until they were almost unrecognisable”. Mr Reynolds estimated the loss to be around £250, equivalent to £250,000 today. The pub was re-built within a few years and reopened for business.

With the decline in pubs across the country the pub closed in 2011. It was sold in 2012, the top floor is now flats and the ground floor is a takeaway and separately run cafe. 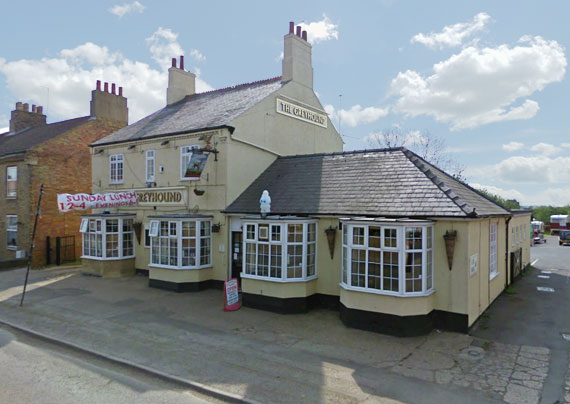 The Greyhound is on Crowland Road. Originally the pub was the building on the left while the smaller single-storey building to the right was a post office and grocery. An extension was added to the rear in 1979 and a further extension added in 2000.

In January 1892 just 15 months after the fire at the Spade and Shovel the Greyhound suffered a similar fate. The Greyhound at the time was one of the oldest buildings in the parish and the Landlord, Mr F. Hunting had been Landlord for a quarter of a century. The building was thatched with a bay window, upstairs it had four bedrooms, and at the rear was the club-room and farm-yard. Adjoining the public-house was a grocery and general stores also run by Mr Hunting.

The fire was discovered by William King, a gamekeeper who was crossing a nearby field. After a closer investigation he saw that the roof was already well alight. The Peterborough Standard of 11 January 1892 reported “He walked into the house and almost dumbfounded those who were present with the remark, “Don’t you know the house is on fire?” The two sons of Mr Hunting then moved documents and furniture out of the building while Mr King ran down the road to get the Fire Brigade, who arrived 10 minutes later. Although the fire engine attempted to fight the fire the nearby water supply ran out, and from that point, the building was doomed. Once started, the fire had spread very rapidly through the thatch and within half an hour of the fire being discovered the roof fell in carrying with it the part of the inner walls. The fire was put out within two hours and the grocery store next door was saved.

The damage was estimated to be around £1000 with over £250 worth of stock lost. The following day all that was left were four blackened exterior walls. The fire, similar to the one at the Spade and Shovel was thought to have originated in one of the main support beams. As it was winter the fireplace had been kept alive for weeks and it was suspected that the heat in the chimney had spread to the thatch which then caught alight.

Although the fire was fierce the four exterior walls and even the sign on the front only had minor damage. The pub was rebuilt within a few years using the existing walls and structure.