Its hard to imagine now but at one time Eye had a railway line running along the north of the village and a station to the north-east. Sadly none of this is left but you can see the remains of the track bed to the east of the village. Permission for building the line went through Parliament in 1863 and it’s recorded in the ‘Solicitors’ Journal and Reporter’ that a £180,000 capital (around £292 million today) was available for construction of the line from Peterborough to Sutton Bridge, around 28 miles. The line called the Peterborough, Wisbech and Sutton Bridge Branch line opened in 1866 and closed in 1959. At opening, the line was owned by the Boston, Stamford and Birmingham Railway Company and thought to have been built by the Waring Brothers.

In 1893 the line was taken over by the Midland and Great Northern Joint Railway (M&GN). The M&GN was formed from the amalgamation of a number of smaller, independent lines across the East Anglia until it was taken over by (London North Eastern Railway) LNER in 1936. Under nationalisation in 1948 it became part of British Railways although the lines were always known as the “old M&GN” and still are to this day. The railway thrived during the golden age of steam but suffered when as cars and lorries became commonplace. 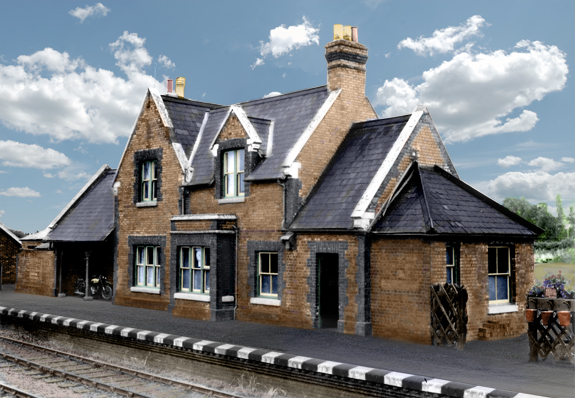 The line through Eye opened for goods on the 1st June 1866 and 1st August 1866 for passengers. It was constructed to provide access to Wisbech, which at the time was a thriving port town.

Starting in the west the first station was Peterborough North and along the line were stations at Eye, Thorney, Wryde, Murrow, Wisbech St. Mary, Wisbech and Tydd St Mary, finally it joined the Spalding to Lynn section of the M&GN at Sutton Bridge. At the time, travelling via Kings Lynn, you could get to Hunstanton, Great Yarmouth or Cromer by train from Eye.

The M&GN left the Great Northern Railway (GNR) north of Peterborough station, climbing up on an embankment to the west side of the line and going over the GNR to the East on what was, and still is called Rhubarb Bridge. The name comes from the fact that soil to build the embankment was brought in from nearby farms and this was full of Rhubarb roots which flourished and covered the embankment. The line then continued on to the North of Dogsthorpe, parallel to Soke Parkway. On Google maps you can clearly see where the line of the track used to run.

Continuing on the line passed Dogsthorpe brickyards and the large grain silo which was constructed during World War 2. As you approached Eye on the train you would have first gone under Hodney Road and then Crowland Road bridge before approaching the station. The Eye bypass covers most of this now. As you travel up Hodney Road you can still see the rise in the road, although the bridge no longer survives after being pulled down in the 1980s.

The station was called Eye Green for Crowland although Crowland was a good five miles away, at the time of opening cars hadn’t even been invented so it would have been a short horse ride or quite a long walk. It was officially opened on the 1 August 1886. In 1865 permission was given for a line to Crowland and again a proposition was put forward just after the second world war although neither project ever came to fruition.

As far as passengers go it was never a busy station, but at certain times of year was active with the loading of local produce, such as potatoes in the autumn. From the 1890’s you could also send a telegram to anywhere in the country, this was before homes had telephones. From the start of the 1900’s, there was also the busy sidings for the brickyards.

“Eye station back in 1950 was quite a busy place. A train used to come every day from Peterborough to collect the loaded wagons from the brickyard and to bring goods for the local farmers, such as fertilizer, seed potatoes etc, and the local shops had daily deliveries. Mr Weldon used to have the fish for his chippy delivered by rail.” J Longland

William Hipworth was born in 1876 and by 1911 he had been married to Annie for 10 years, he had two sons Arthur aged 3, and Raymond aged 4 months and a daughter Maud who was 5. He would have been in charge of the station and would have had a significant social standing. The main part of his job would have been managing the other station employees and having responsibility for the safety and the efficient running of the station. The term is still sometimes used in large stations, although it has generally been replaced by ‘station manager’.

The railways and brickyards were major employers in Peterborough at the turn of the century and the brickyards provided a considerable amount of freight for the line, brick trains regularly left the yards for distribution around the country.

Eye Green is also noted as having the first signal on the M&GN that was ‘upper quadrant’ Basically they were much safer as the arm was up for off and fell to horizontal through gravity whereas the old system used a heavyweight to get the signal up to horizontal as down was off. Wiki has a lot more detail on this.

Originally there were two signal boxes at Eye Green but in 1900 the line was doubled to Thorney and the west box was closed and demolished. The signal box was a Midland Type 2a which were built between 1884 and 1893. The type 2b was built between 1892 and 1901. The Type 2 is still in use on mainline and heritage lines today. Oakham signal box (Type 2b) on the cross country Birmingham to Peterborough line and Butterley signal box (Type 2a) on The Midland Railway, a heritage line are two examples. The design of the Oakham signal box was used for an Airfix plastic kit, now made by Dapol. You can see an image of the signal box track layout for Eye Green here.

“A fond memory I have is that sometimes the engine drivers would allow me to ride on the engine footplate as they were shunting around the goods yard. Also in the summer, we had the excursion trips on Sunday to Hunstanton and Yarmouth.” J Longland

The table below shows how many passenger trains travelled along the line on a given day. It took around 10 minutes to get to the centre of Peterborough, similar to driving today.

In the summer of 1950, Sunday passenger trains to Hunstanton were introduced. This was the first time since 1866 that a Sunday service was advertised. A point also to note is the Queen travelled along the line in 1953 due to flooding on the route she would have taken. Whether she even noticed Eye Green station we will never know.

Like any railway line there were incidents, a couple of examples below:

In 1884 there was a report of a collision between two trains at Wisbech: “Two trains came into collision on the Peterborough, Wisbech, and Sutton Railway at Wisbech on Saturday evening. A goods train from Lynn left Wisbech at 6.20 pm, and when a few hundred yards from the station, near the Barton-road crossing, came into collision with a goods train coming from Peterborough. The trains met with considerable force, and the rolling stack was much damaged. The driven and stokers, seeing that a collision was inevitable, jumped off, and the guard received no injury. The tender of one of the trains was lifted off the wheels and carried over the engine, and several of the trucks were thrown off the line. A guard, with great presence of mind, ran back to the station to stop the passenger train, which was about to leave. The passengers were detained till the arrival of the Peterborough down train, when those detained at Wisbech station were transferred. The breakdown gang arrived from Peterborough at half-past ten and at once began to clear the line. The two engines had remained on the line locked together. The greater portion of the Peterborough train, which was heavier, and travelling at a higher speed than the other, was composed of coal waggons, but the vans which received the most injury contained a large consignment of toys for Wisbech tradesmen. The staff system is in force on this line, but for some unknown reason, the driver was allowed to leave the Wisbech station with a ticket in place of the usual staff.”

In 1944 part of the bridge over the railway on Crowland Road in Eye fell off the bridge hitting the guards van parked at the train station: “Four minutes after a passenger train had passed a six-foot section of the arch of Eye Green railway bridge, which carries the Peterborough to Crowland road over the M. and G. N. line. fell on to the line. This was at 10 am on a Saturday morning. The end of a girder struck the roof of the guard’s van of a goods train which was stationary but the damage was minor. Special Sergeant Dighton of Eye who is a builder considered the bridge unsafe for road traffic and ordered a diversion by way of Green Drove and Hodney Road. His view was confirmed by representatives of the L.N.E.R District Engineer’s dept, and the bridge was closed until repairs had been effected. It was found that the collapse was due to the fracturing of a girder which had evidently been cracked for a considerable time and had become badly corroded.”

Further images of the line starting in the east where the line goes over the mainline, ending up at Sutton Bridge where the line joins the Spalding to Lynn line.

15 thoughts on “Eye Green Railway Station and the M&GN”